At the left are my six previous nonfiction titles, arranged from most recent down to the earliest. Clicking on "Fiction" above takes you to images of my two novels, with descriptions and critical responses. 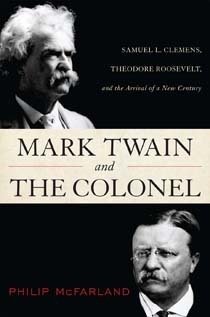 Mark Twain and the Colonel

Much of what we know as America was formed during the two decades around 1900. In 1893, the frontier, which had shaped our earlier agrarian Union,was pronounced closed, no portion of the land left to penetrate, clear, and settle. In 1896, in a postbellum industrial Nation, the Supreme Court decreed that the white and black races were to be kept “separate but equal”—a decision that stood until 1954; remnants of that iniquity litter our lives still. In 1898, war turned America into a world power, and Colonel Theodore Roosevelt came out of that war hailed as a national hero. In 1901, the hero became president; and a year later he bore down on trusts, huge corporate entities formed in a period of exploding growth and technological advances. Nothing like the trusts had been seen before. Soon after the turn of the century the patrician Roosevelt refined the tools to trim their burgeoning excesses; and it was during the same years that Mark Twain, the Missouri democrat Samuel L. Clemens, counted as his best friend an official presiding near the pinnacle of the most intimidating trust of all. MARK TWAIN AND THE COLONEL develops those lively personalities and the stirring issues of two decades from which the America we know emerged.

Philip McFarland’s new book, the latest in his distinguished series of American biographies and histories, fuses two vivid stories set around the first decade of the twentieth century. One touches on the astonishing career of President Theodore Roosevelt, an eastern patrician sometimes derided as a “cowboy” and saber-rattler. He speeded the emergence of modern America from a frontier nation to a world power with far-flung interests. The second of McFarland’s stories follows the comparably astonishing career of the democrat and westerner Mark Twain, who came east from the closing western frontier and became famous as author, humorist, and universal sage. More than a century later, these two flamboyant personalities, each a distinctly native production and neither at a loss for words on every issue of their time, continue to occupy a formative place in the American style and imagination. —Justin Kaplan, author of MR. CLEMENS AND MARK TWAIN

A magnificent storyteller, Philip McFarland has told the story of late nineteenth- and early twentieth-century America through the intertwined lives of two of its most memorable and colorful figures: Mark Twain and Theodore Roosevelt. Impeccably researched, beautifully written, MARK TWAIN AND THE COLONEL will delight anyone interested in American history, literature, or culture. —Jerome Loving, author of MARK TWAIN: THE ADVENTURES OF SAMUEL L. CLEMENS

LIBRARY JOURNAL (12/6/12) chose MARK TWAIN AND THE COLONEL, with its "sweeping, engrossing narrative," as one of the Best Books of 2012. 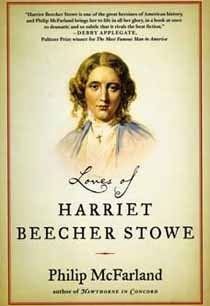 The biographer son of the author of UNCLE TOM'S CABIN wrote of his mother: "She was impelled by love, and did what she did, and wrote what she did, under the impulse of love." "I love everybody," Harriet Beecher Stowe once told a friend. But Stowe felt hatred for the foul stain of slavery, and hatred for the free-love advocate Victoria Woodhull, and hatred even for the poet Byron, as a husband who abused a woman whom Mrs. Stowe deeply loved. For love was Stowe's lifelong theme: of her Savior, of her husband, of her children, of her sisters and brothers, of the exalted Lady Byron and the humble black people alongside whom she worked through a lifetime. LOVES OF HARRIET BEECHER STOWE describes that amazing lifetime, the woman who lived it, and the fascinating people it was lived among.

"Harriet Beecher Stowe is one of the great heroines of American history, and Philip McFarland brings her to life in all her glory, in a book at once so dramatic and so subtle that it rivals the best fiction." —Debby Applegate, author of HENRY WARD BEECHER: THE MOST FAMOUS MAN IN AMERICA

"Philip McFarland has written an absorbing biography of Harriet Beecher Stowe's passions—for husband, family, friends, and above all for her work. Stowe lived large, loved powerfully, and wrote to change the course of history." —Megan Marshall, author of THE PEABODY SISTERS: THREE WOMEN WHO IGNITED AMERICAN ROMANTICISM

"Often dismissed even by her admirers as a pious faculty wife who just happened to write the book of the century, Harriet Beecher Stowe emerges in Philip McFarland's biography in all her complexity and genius. In an age of bloated biographies, it is a pleasure to find a writer who can distill a copiously documented life into such supple and succinct prose." —Charles C. Calhoun, author of LONGFELLOW; A RECONSIDERED LIFE

And reviewing the book in the BOSTON GLOBE, Patricia Hill, professor of history and American studies at Wesleyan, describes Philip McFarland as "a wonderful storyteller," and LOVES OF HARRIET BEECHER STOWE as relating "the adventures and misadventures of Stowe and selected members of her remarkable family" in an account "spiced with choice selections from the voluminous family correspondence that offer an almost voyeuristic pleasure. Ostensibly the story of one woman, the narrative paints, with broad strokes and graphic details, a history of the United States in the 19th century." 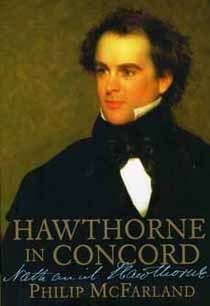 HAWTHORNE IN CONCORD is a narrative of Nathanel Hawthorne's years in Concord, Massachusetts, from his wedding day in 1842 to his death in 1864. "The whole cast of luminous characters is here," writes Bernard Bailyn, "their lives, loves, and comings and goings, not just as minds but as people—Emerson, Thoreau, Longfellow, Margaret Fuller, Horace Mann, the Alcotts, the Peabodies—all circling around the central figures of Hawthorne and his wife. It's a fine, readable book of biography and cultural history." David Herbert Donald concluded: "I don't know when I have read a book as satisfying as HAWTHORNE IN CONCORD. Not since Van Wyck Brooks's THE FLOWERING OF NEW ENGLAND has anyone else so perfectly re-created the world of the New England Renaissance." And for Pulitzer prizewinner Elizabeth Frank, "HAWTHORNE IN CONCORD probes, with exquisite insight, the close and intricate relations of the most gifted circle of writers America has ever had. It is a beautiful, indispensable and quietly stunning piece of work." 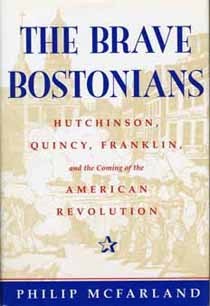 THE BRAVE BOSTONIANS provides a stirring account of the year leading up to the American Revolution, from the perspective of three intertwined lives: the Loyalist Thomas Hutchinson, the Diplomat Benjamin Franklin, and the Patriot Josiah Quincy. Robert Middlekauff, author of BENJAMIN FRANKLIN AND HIS ENEMIES, adjudges it to be "an excellent work that deserves to have a wide readership. It is interesting, thoughtful, and well-written." Justin Kaplan found the account "an exciting story told with stylistic sureness, narrative pacing, and a firm command of the materials. It dramatizes the human and personal transactions that helped drive a great historical event." And according to Pauline Maier, author of AMERICAN SCRIPTURE, "THE BRAVE BOSTONIANS tells with great vividness and human detail the story of how, in 1774 and 1775, England and America moved, step by step, toward a war that neither wanted. It provides a gripping introduction to the American Revolution for anyone anxious to know more about that event." 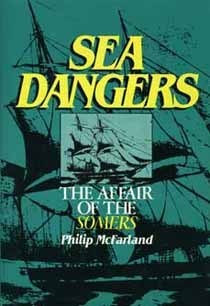 SEA DANGERS is a narrative that recounts the only mutiny of record in the U.S. Navy. In 1842, the captain of the SOMERS hanged at the yardarm three crew members accused of plotting to seize the ship. The ringleader was a teenaged midshipman who happened to be the son of the then-Secretary of War, John C. Spencer. Christopher Lehmann-Haupt in the NEW YORK TIMES felt that the book tells "a gem of a story" in "a wonderful setting of history." And Kirkus Reviews concluded: "As disturbing as THE BOUNTY TRILOGY, as provocative as THE CAINE MUTINY, as telling as anything this side of Melville, it is that rare breed of sea-saga—a four-sails-to-the-wind, can't-put-down piece of naval history."

SOJOURNERS is a narrative account of the life and times of Washington Irving. R.W.B. Lewis in the NEW YORK TIMES praised the book for bringing Irving's world to life with "an almost Faulknerian intensity," and called it "a constantly beguiling and informative experience." Ed Cray in the LOS ANGELES HERALD EXAMINER called it "hands down, without qualification, the most audacious, compelling biography of an American literary figure, of any literary figure, in a decade." And James R. Mellow in the CHICAGO TRIBUNE described SOJOURNERS as "one of the most absorbing cultural histories I have read."